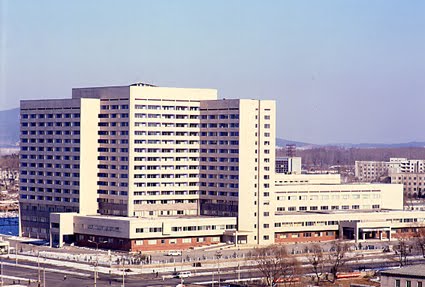 The Ministry of Health of the Democratic People’s Republic of Korea (DPRK) has approved the use of Kim Man Yu Hospital in Pyongyang as the training hospital for PUST DMS School of Medicine (SOM).  Multiple members of our SOM team have already visited the hospital to meet with their administration and the medical staff.  The PUST DMS is evaluating a plan that would upgrade the first two floors of the facility to be compatible with Western medical equipment.

The hospital was built in 1986 and is located on Munsoo Street near the Daedong River in the capital city Pyongyang.  The Kim Man Yu Hospital has more than 1300 beds and 200 inpatient rooms.  At the time of its completion and throughout the 1990’s it was described as the most medically advanced hospital in the DPRK.  The hospital has two cardiac angiography suites and is appraised to have expertise in cardiovascular procedures.

The hospital was funded through a generous endowment donated by Dr. Kim Man Yu.  Dr. Kim was a Korean-Japanese physician who immigrated to Japan in 1936.  He completed his medical training in Japan and practiced medicine there his entire career.  He was part of the General Association of Korean Residents in Japan (known as “Chongryon”) established in 19821.  Dr. Kim was also known to be a Korean patriot opposing the acts of Japan during the Manposan Incident in July 1931.  This led to his imprisonment for 21 months.

In honor of Dr. Kim’s patriotism, the DPRK gave the hospital its name as the Kim Man Yu Hospital in 1986.  Dr. Kim passed away on December 26, 2015.  He was 91 years old.  This photograph of Dr. Kim is hanging in the main entryway of the hospital.